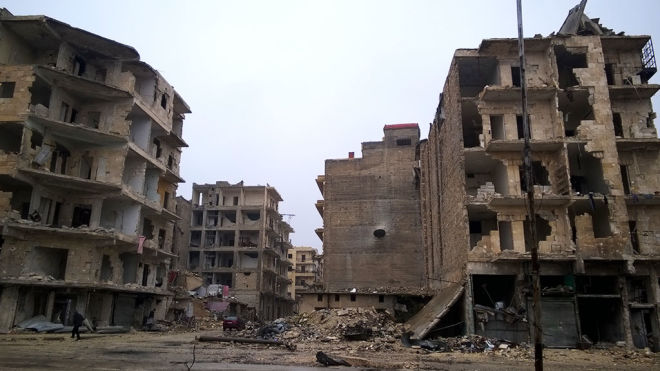 The evacuation of the last opposition-held areas of the Syrian city of Aleppo was suspended on Friday after pro-government militias demanded that wounded people should also be brought out of two Shi'ite villages being besieged by rebel fighters.

Axar.az reports citing to Reuters, the second day of the operation to take fighters and civilians out of Aleppo's rebel enclave ground to a halt amid recriminations from all sides after a morning that had seen the pace of the operation pick up.

"Aleppo is now a synonym for hell," U.N. Secretary-General Ban Ki-moon told reporters. "I very much regret that we had to stop this operation."

Aleppo had been divided between government and rebel areas in the nearly six-year civil war, but a lightning advance by the Syrian army and its allies that began in mid-November deprived the insurgents of most of their territory in a matter of weeks.

Russia said the Syrian army had established control over all districts of eastern Aleppo although government troops were suppressing isolated areas where rebel fighters continued to resist.

Rebel sources said pro-government Shi'ite militias of opening fire on a convoy carrying evacuees from east Aleppo and robbing them. A Syrian military source denied the accusations but said the convoy was turned back.

"We returned them to their places," he said.

The Syrian Observatory for Human Rights, a Britain-based war monitoring group, said a group of ambulances and cars containing hundreds of civilians and fighters were stopped by pro-government gunmen at a checkpoint south-west of Aleppo. They later returned to the enclave.

Rebels in eastern Aleppo went on high alert after pro-government forces prevented civilians from leaving and deployed heavy weaponry on the road out of the area, a Syrian rebel commander in the city said.