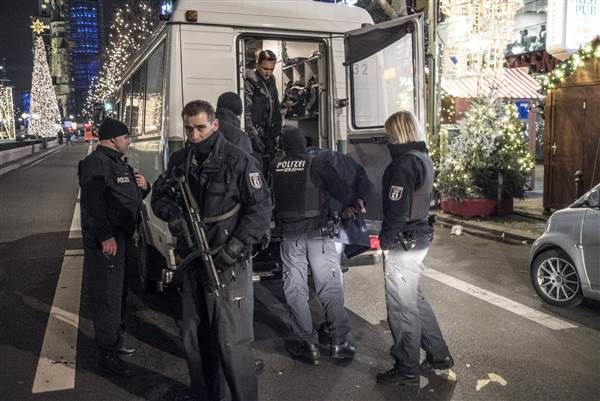 Authorities raised the death toll to 12 Tuesday morning after a truck plowed through a Christmas market in Germany's capital, Berlin. At least 48 other people were injured.

The incident happened Monday night at Breitscheidplatz, a public square in the center of Berlin. German police said a man who was found dead in the truck, which bore Polish license plates, was a Polish citizen but was not the driver.

A second person was arrested near the public square, police said. No further details of the arrest were provided.

It wasn't clear whether the truck veered into the holiday crowds on purpose or by accident. But Ned Price, a spokesman for the U.S. National Security Council, said in a strongly worded statement that the incident "appears to have been a terrorist attack."

"Germany is one of our closest partners and strongest allies, and we stand together with Berlin in the fight against all those who target our way of life and threaten our societies," he said.

Emma Rushton, a witness, told NBC News that she heard the "terrifying" crash while she was with a friend at the Christmas market while on vacation in Berlin from Rugby, England.

"People were bleeding. There was lots of blood and lots of crying," she said.

Rushton said she that thought the truck was going about 40 mph and that "there was no way it was just a veer-off-the-road accident."

Other witnesses said victims were crushed.