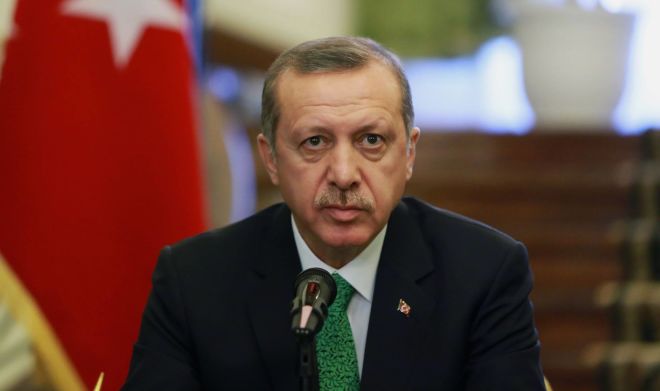 President Recep Tayyip Erdoğan said late Tuesday that the Turkish military and the Free Syrian Army (FSA) fighters have encircled IS terrorists in Syria's key Al-Bab city and the liberation of the town is close.

Axar.az reports that , "Even though the U.S.-led coalition has failed to keep its promises in our operation to liberate Al-Bab, we will rid the city of ISterrorists, no matter what," he said.

Touching upon the upcoming Astana summit, he said that Saudi Arabia and Qatar should also be invited. "We will not welcome a decision to invite terrorist organizations to the summit," he added.

Referring to the importance of Al-Bab both geographically and strategically, he said: "We will not take a step back from our decision to liberate Al-Bab, that's impossible."

President Erdoğan and his Russian counterpart Vladimir Putin recently agreed on peace talks to be held between Syrian moderate opposition representatives and the Assad regime in Astana, Kazakhstan.

Speaking at a news conference during a visit to Japan, Putin said that the Astana talks will be held in addition to the UN-brokered Geneva talks