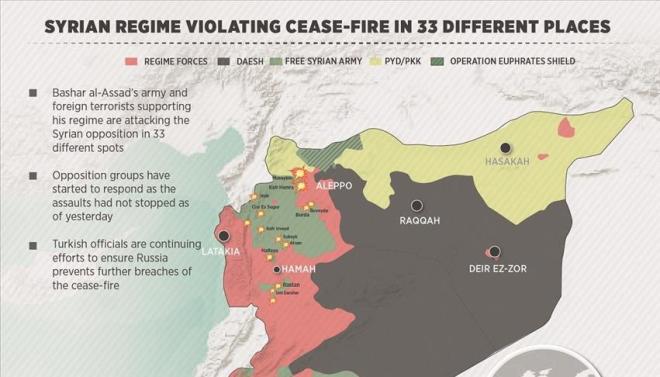 Axar.az reports that, according to information gathered from sources at opposition front-line positions, since the truce came into force on Friday at midnight local time, the Syrian military and foreign pro-regime terrorist groups attacked 33 different locations.

Opposition fighters claimed they had started to respond, as the assaults had not stopped as of Friday.

Turkish officials are continuing efforts to ensure Russia prevents further breaches of the cease-fire, one security source who asked not to be named, told.

However, Turkey's defense minister said earlier on Saturday there had not been any violations so far which could "undermine" the cease-fire.

Fikri Isik's remarks came during his visit to Turkey's southeastern province of Sirnak, where he answered journalists' questions.

"We have to be very careful about this issue," Isik said. "We are watching every step along the way with the Russian Federation to make sure the cease-fire is permanent and [a] political solution paves the way for Syria's future."

A nationwide cease-fire in Syria took effect at midnight (2200GMT) Dec. 30, after a deal was brokered with Turkey, Russia and the government of Syrian President Bashar al-Assad.

Syria has been locked in a devastating war since early 2011, when the Assad regime cracked down on pro-democracy protests -- which erupted as part of the Arab Spring uprisings -- with unexpected ferocity.S