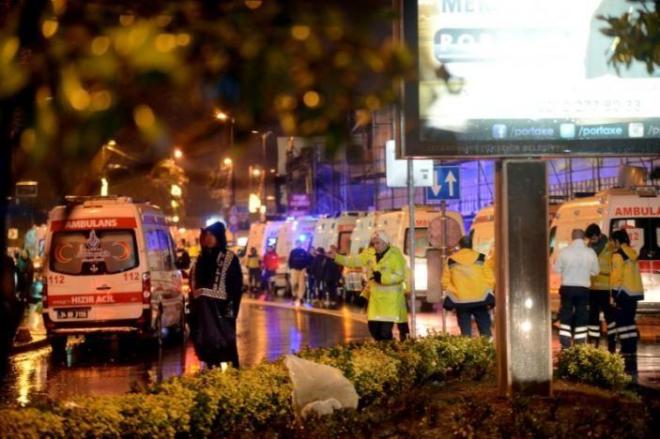 Axar.az reports that, the couple had flown to Turkish capital Ankara together on 29 November before suspect disappeared last week

The wife of Istanbul’s terror attack prime suspect claims she knew nothing about the murderous plot – despite travelling with him to Turkey.

Turkish police believe a well-trained gunman from central Asia, who had learnt how to fight in the Syrian war, is behind the attack that left 39 dead.

And details today emerged about how he travelled to Turkey from his homeland with his wife and two kids in November.

She has denied prior knowledge of her on-the-run husband’s alleged loyalty to ISIS, according to Turkish newspaper Hurriyet.

Turkish police believe the Istanbul nightclub gunman travelled to the country with his wife and two children in November. He appeared in a selfie video before the attack
ISIS has claimed that the gunman was acting on their behalf.

Istanbul nightclub attack suspect 'recorded video selfie' in Taksim Square
They are understood to have arrived in Turkish capital Ankara on November 20 before moving onto the city of Konya.

There they rented a flat for £250-a-month. The alleged gunman is believed to have told his wife he was going away in search of work on Thursday.

She told police how she only learned of the attack on TV two days later.