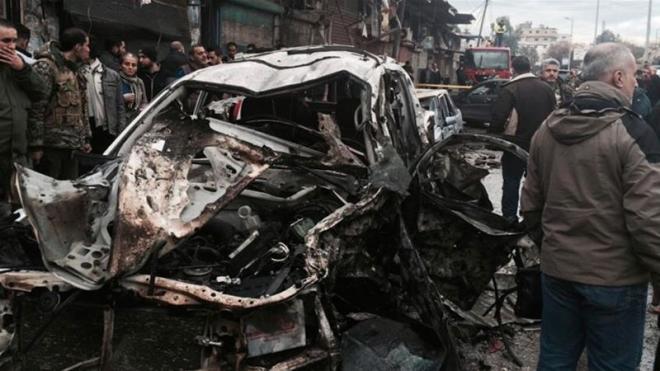 At least 11 people have been killed and 35 others wounded in a car bomb attack on the Syrian government-held coastal town of Jableh.

Thursday's attack in Latakia province is the first such explosion since a new ceasefire, brokered by Russia and Turkey, took effect last week.

Jableh is close to a Russian air base and located in the heartland of Syria's Alawites, a Shia offshoot to which President Bashar al-Assad's family also belongs.

State TV showed footage of mangled cars and shutters of shops damaged and blown apart as rescue workers cleared the debris amid a heavy security presence in the bustling commercial area near a popular vegetable market and a garage depot.

As most of Syria’s government-held coastal cities and towns, Jableh has enjoyed relative stability during the almost six-year conflict.

In May, however, a string of blasts hit first a crowded bus station in the city, then outside a hospital that was receiving the wounded. About 120 people died in that attack, which was claimed by the Islamic State of Iraq and the Levant (ISIL) group.

No group immediately claimed responsibility for Thursday's bombing. ISIL and several other groups are not part of the broad truce that the government and the opposition agreed on recently.