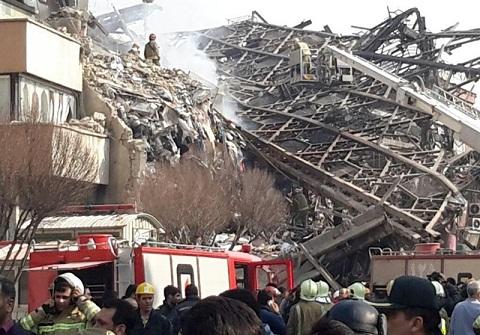 Some 30 Iranian firefighters were killed after the commercial building collapsed, Press TV reports.

Police have cordoned off the area, and rescue teams are on their way to the scene, state TV reported.

An official was quoted as saying that between 50 to 100 people are believed to have been trapped under the rubble, Press TV reported, adding that nearby buildings including the embassies of Turkey and the UK have been evacuated.

The building came down in a matter of seconds, with a thick plume of smoke instantly rising over the site.

The fire spread throughout the seventeen-story building in the early hours of Thursday morning, despite efforts by Tehran firefighters to put out the blaze, Iranian government news agency IRNA reported, adding that Plasco Trade Center is the biggest in the Iranian capital.