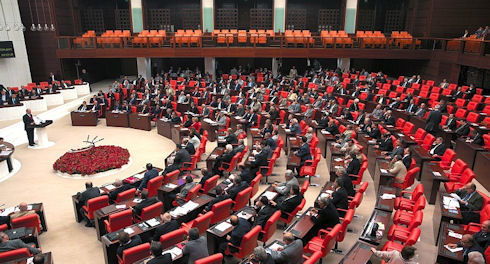 Parliament on Thursday adopted four more articles of a new constitutional reform package ahead of a referendum likely to be held in April.

The second round of voting on the new laws began Wednesday after almost three weeks of debates in parliament.

A first round of ballots on the reforms was completed as lawmakers passed 18 articles -- each with more than 340 approval votes.

Lawmakers are voting again on each article for a second time and on the entire package.

Article 8, one of the most debated items among a total of 18, was passed with more than 339 lawmakers voting to allow "the head of the state" executive power to appoint and dismiss ministers.

The ninth and tenth articles, which regulates criminal liabilities for the president and stipulates that the Turkish Grand National Assembly will need an absolute majority to investigate alleged crimes by the president, each passed with at least 340 votes.

Eligibility for posts and time limits on investigations and trials of top official are also enshrined in the articles.

Presidential and parliamentary elections will now be held on the same day after 342 MPs approved the change in Article 11 that also sets a five-year term limit on deputies and the president to govern. A second presidential term can be served if MPs approve.

Earlier Thursday, MPs approved articles 6 and 7 that deals with parliament’s supervisory authorities and eligibility for president.

Voting on the remaining 7 amendments will continue Friday.

If the entire package passes parliament with at least 330 of 550 deputies, the new articles will be put to vote in a national referendum.

If the reforms obtain the support of 367 lawmakers, it can pass into law without a referendum although President Recep Tayyip Erdogan said he would push for a referendum even if the draft is approved by a two-thirds majority.

Proposed changes to the Constitution require a simple majority, or 51 percent, in the referendum.

The ruling Justice and Development (AK) Party has 316 seats and the Nationalist Movement Party (MHP) -- which has so far supported the constitutional change -- has 39 seats.

Approval votes from the two parties would be enough to secure a referendum.