41 get hospital care after nightclub fire 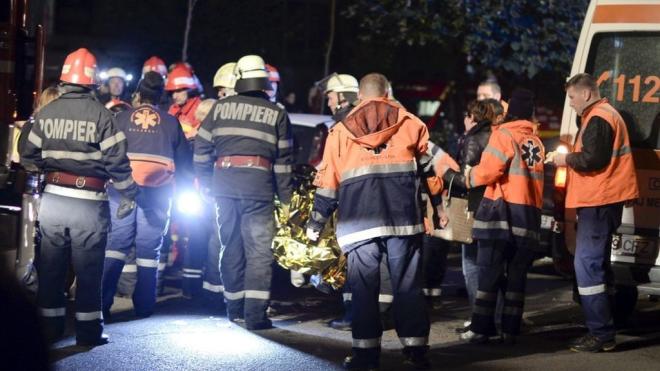 Fire engulfed a popular nightclub in the Romanian capital early Saturday, sending 41 people to hospitals for treatment including one who was seriously injured. No deaths were reported.

The fire erupted in the early hours at the upmarket Bamboo nightclub, which was burned to the ground. Some people suffered from smoke intoxication while others were injured as they reportedly leapt from the upper level of the lakeside club to escape the flames.

The health ministry said 41 received hospital treatment, updating an earlier figure. Hundreds were reportedly in the club at the time.

The fire evoked memories of the disaster at another Bucharest nightclub in October 2015, which killed 64 people— the worst nightclub fire in the country's history.

There was no definitive word on the cause of the fire. Eyewitness Corina Anghel told private television station Dig24 that people were smoking upstairs, and the roof caught fire. She also said waiters served bottles of drinks with sparklers attached. Indoor fireworks and smoking inside public places are illegal in Romania. Prosecutors have opened an inquiry.

A score of ambulances rushed to the scene as revelers ran outside. Bogdan Oprita, coordinator of the capital's ambulance service, said most of the injured were suffering from smoke intoxication. Others who rushed outside without picking up their coats suffered hypothermia in the -12 Celsius (10 Fahrenheit) cold.

Senior emergency situations official Raed Arafat said one person was seriously injured and that almost half of the injured used their own transport to reach hospitals. About half a dozen remained hospitalized.

Bamboo has several clubs in Romania, and one in Miami, Florida. It first opened in Bucharest in 2002 and was rebuilt after it was destroyed by a fire in 2005.