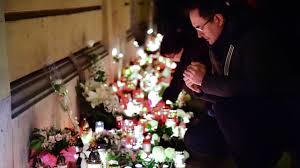 Relatives are arriving in Verona, northern Italy, where a bus carrying Hungarian students crashed, killing 16 people, most of them teenagers.

Axar.az reports that, the Hungarian consul in Italy warned the number of victims could rise to 18.

The vehicle, which had been carrying students, teachers and parents back from a week of skiing in France, went off the road and burst into flames near Verona.

Lanfranco Fossa, who saw the bus on fire, spoke to some of the students.

They told him most of the pupils had been asleep.

“One said he felt the bus swerving and then there was a huge noise, which was probably when they slammed into the pylon,” he said.

In Budapest, a vigil was held outside the students’ secondary school in the city centre.

Hungary has declared Monday a national day of mourning for the victims of the tragedy.