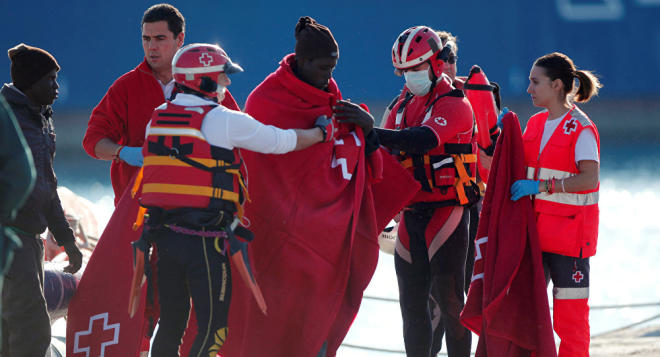 49 migrants were rescued about 86 miles southeast of the city of Almeria in the Spanish region of Andalusia, after the boat was found offshore, according to local media.

Axar.az reports that, Sub-Saharan migrants sit on a metal fence that divides Morocco and the Spanish enclave of Melilla

The Spanish Maritime Safety Agency saved 49 migrants en route to Spain from Africa, whose boat had been adrift in the sea for two days, Spanish media reported Saturday.
The boat was found offshore, about 86 miles southeast of the city of Almeria in the Spanish region of Andalusia.

According to the media outlet, after the boat was discovered with the help of a helicopter, everyone aboard was taken ashore.

In recent years, hundreds of thousands of migrants from the Middle East and North Africa have attempted to reach Europe, mainly along the Mediterranean Sea route, seeking asylum in EU member states.
According to the International Organization for Migration (IOM), over 360,000 migrant and refugees arrived to Europe via the Mediterranean Sea in 2016. The year was the deadliest for migrants on record in the region, with over 5,000 deaths at sea, the IOM said.