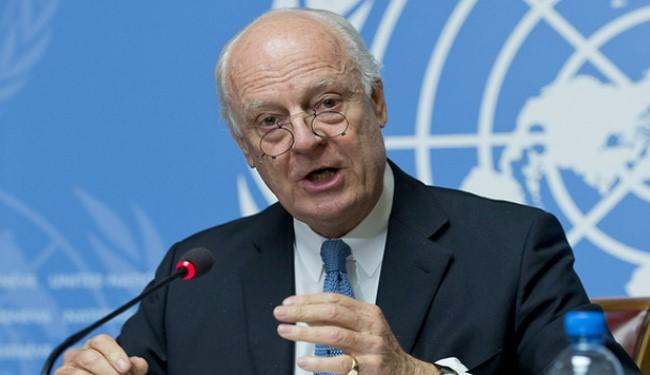 Syria's main opposition delegation on Wednesday asked for direct discussions with government representatives at the Geneva IV peace talks aimed at ending the six-year conflict by reaching a political solution.

"We want direct talks, direct negotiation. It is enough for Syrian people. l hope to see serious partners," High Negotiations Committee (HNC) spokesman Salem al-Muslat told journalist in Geneva on the eve of talks with the Syrian regime and opposition.

Criticizing the regime’s delegation, al-Muslat said "they are not here really to negotiate about political transition but they are here just to buy time and commit more crimes in Syria. There is no trust in this regime”.

He said “Iran is an occupying state in Syria” and “could not be a guarantor state”.

UN Special Envoy for Syria Staffan de Mistura said Wednesday he did not expect a breakthrough at the talks this week and he would refuse any preconditions ahead of the negotiations that would focus on new elections, a new constitution and governance in Syria.

De Mistura said Russia asked the Syrian government to halt its bombings during the talks.

"Today, the Russian Federation did announce they have formally requested the government of Syria to silence their skies during the intra Syria talks," de Mistura said.

This week will be the first time the Syrian regime and opposition delegations have returned to Geneva since talks were suspended last April.