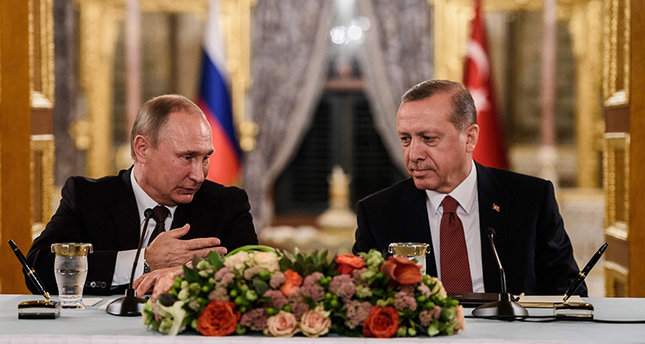 President Recep Tayyip Erdoğan will pay a visit to Russia on March 10 to attend a high-level meeting with Vladimir Putin where the TurkStream natural gas pipeline project and Akkuyu Nuclear Power Plant will be discussed, according to a statement released by the Kremlin on Tuesday.

Axar.az reports that during the meeting, bilateral relations between Ankara and Moscow are expected to be discussed "extensively," the statement said.

The High-Level Cooperation Council (HLCC) is usually headed by President Erdoğan and his Russian counterpart Putin and includes government ministers from both states.

The statement added that the leaders will exchange views on regional and international issues, particularly Syria.

"Several agreements will also be signed during the visit, which is expected to contribute to the development of Turkish-Russian relations," it said.

The last Erdoğan-Putin meeting was held last August after Turkey and Russia patched up the fallout from the November 2015 downing of a Russian jet over the Turkey-Syria border.

Since the summer, Russia has relaxed the sanctions imposed on Turkey in response to the jet incident and the countries have worked together to bring a cease-fire and political solution to the conflict in Syria.

A cease-fire agreement in Syria had been reached under guarantees from Russia and Turkey in December.