Muslims in Europe establish their own parties - Photo 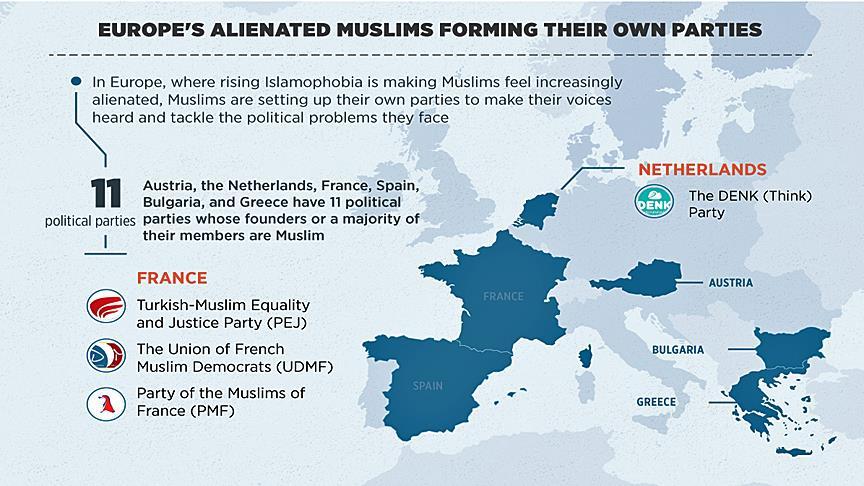 Muslims in countries worldwide are forming their own political parties to make their voices heard and tackle their problems through political means.

Axar.az reports Europe or European territories have 11 political parties founded by Muslims or with mostly Muslim membership. Parties in France, Austria, the Netherlands, Spain, Bulgaria, and Greece were founded to counter the rising tide of Islamophobia and discrimination against Muslims in Europe.

Austria’s New Movement for the Future Party (NBZ) was founded by Adnan Dincher to become the voice of minorities in the country.

"There is no party in the country that works to solve the problems of minorities," he said. On the contrary, other parties in the country have an anti-minority attitude, he added. "It’s for this reason that our political party was needed. NBZ was established to serve this need," he said.

The "Denk" (Think) party was formed due to the 2015 expulsion from the Labor Party of two MPs, Tunahan Kuzu and Selcuk Ozturk, for refusing to support Deputy PM Lodewijk Asscher’s integration policy. The two Dutch MPs of Turkish origin formed a new political party called Denk. The party also includes other Dutch MPs. "Our party was founded to make minorities heard in the Netherlands," said party leader Tunahan Kuzu.

France’s Turkish-Muslim Equality and Justice Party (PEJ) was formed to defend the rights of Muslims who face discrimination in the country.

The PEJ – founded by a joint Turkish-Muslim initiative – was eliminated in the first round of provincial council elections held in March 2015, but still won thousands of votes in four cities and 10 cantons just two months after its foundation. PEJ chair Sakir Colak told that the party’s aim is to fight injustice and inequality.

"We are not just a Muslim or a Turkish party," he said, adding that they want justice for other foreigners as well.

Two similar French parties are the Union of French Muslim Democrats (UDMF) and Party of the Muslims of France.

There are two mostly-Muslim parties active in Spain's North African territories of Ceuta and Melilla, both bordering Morocco. The Coalicion por Melilla party was formed in 1999 in Melilla, and the Coalicion Caballas was formed in 2011 in Ceuta.

There are three majority-Muslim parties in Bulgaria. The Movement for Rights and Freedoms (MRF) party was formed in 1990 by Ahmet Dogan. The Democrats for Responsibility, Freedom and Tolerance (DOST, or “close friend” in Turkish) was founded by Lyutvi Mestan in 2016.

Mestan was expelled from the MRF following a speech defending Turkey and NATO over the November 2015 downing of a Russian warplane along the Turkish-Syrian border. The People's Party of Freedom and Dignity was also formed by Kazim Dal and Korman Ismalov in 2012.

The Party of Friendship, Equality and Peace was founded in 1991 by Dr. Sadik Ahmet. The party has about 6,000 members. Party leader Mustafa Alicavus said its aim is to give minorities a voice.