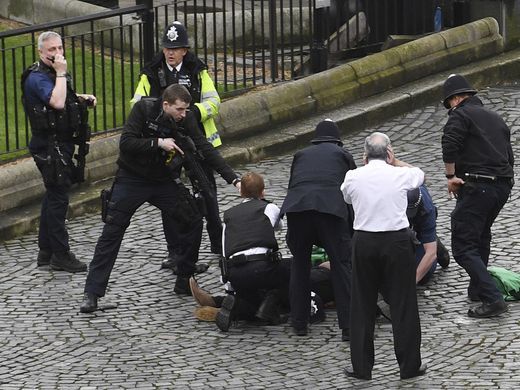 One woman has died after a terror incident that saw a police officer stabbed and as many as a dozen people reportedly run over outside London's Parliament building on Wednesday.

An alleged assailant was also shot by police after stabbing the officer. It is unclear if there were others involved in the attack.

London police were called to the Parliament building at around 2:40 p.m. local time (10:40 a.m. EST) after reports of a vehicle crashing into a crowd at Westminster Bridge near Britain's parliament.

Witnesses say the alleged assailant then stabbed a police officer before he was shot down. The assailant's status is unclear.

It is unclear if the person shot by police and the driver are the same person.

On Twitter, London police said they are treating the attack "as terrorist incident until we know otherwise."

The former Polish foreign minister Radoslaw Sikorski posted a video on Twitter that seems to show people lying injured in the road on Westminster Bridge.

Sikorski, a senior fellow at the Harvard Centre for European Studies, says he saw at least five people lying on the ground after being "mown down" by a car.

Sikorski told the BBC he "heard what I thought what I thought was just a collision and then I looked through the window of the taxi and someone down, obviously in great distress.