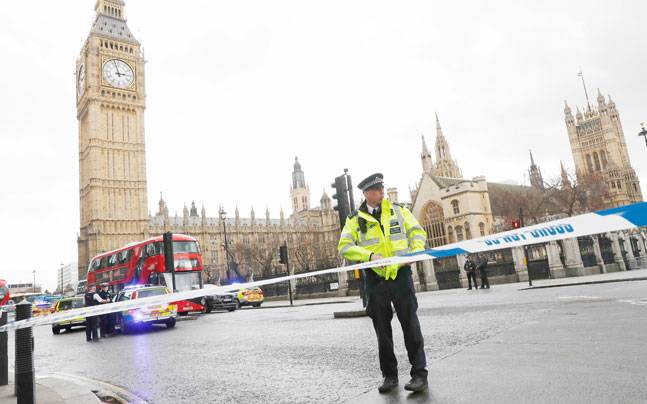 An armed assailant mowed down pedestrians on London’s crowded Westminster Bridge before trying to storm the city’s Parliament building Wednesday, leaving at least three people dead and several others injured.

Police said they are investigating the situation as a terrorist incident and placed the area on lockdown. Police officers shot and killed the attacker.

“Although we remain open to the motive, a full counter terrorism investigation is already under way,” the Metropolitan Police said in a statement.

Bystanders said the suspect drove erratically on the nearby Westminster Bridge, hitting bystanders before driving onto the busy sidewalk in front of the gates of Parliament. Witnesses said the assailant then left the car, rushed through the gates and began attacking police officers with a knife.

One officer was injured before the suspect was taken down. The officer has died, according to the BBC and The Guardian.

Mark Rowley, Metropolitan Police assistant commissioner, said four people are dead, including the assailant and one police officer, and at least 20 others injured. The injured include three police officers who were hit by a car while on their way back from a commendation ceremony.

The London Ambulance Service said it had treated at least 10 people on Westminster Bridge. A doctor at St. Thomas’ Hospital shortly after the incident described the injuries as “catastrophic,” according to the Press Association. French authorities confirmed three French students were among the injured.

Paramedics treated a woman who was pulled from the River Thames following the incident on the Westminster bridge. She was undergoing very urgent medical treatment, the Port of London Authority said.

“I was just outside Westminster tube station when I heard an almighty crash and a vehicle that looked like a 4x4 had crashed into railings. There was smoke coming from underneath the bonnet. I saw a pedestrian or a cyclist who had clearly been hit,” Alan Parry from Sky Sports News said. “The driver sprinted away from the scene. That was followed by four what sounded very much like gunshots. Then all of a sudden all hell was let loose and police descended everywhere. The whole area was locked down.

Wednesday’s incident targeted the area of London where business, government and tourist activity all converge. While probably best known for the “Big Ben” clocktower that’s part of the Palace of Westminster, visitors are also able to regularly tour the Houses of Parliament. Even disruptions that may appear minor, like closed roads and tube stations, can bring this part of the city to a relative standstill.

What appeared to be the prime minister’s official vehicle was seen speeding away from the area just after the incident, Sky News reported. An air ambulance landed in Parliament square just before 3 p.m. local time, aerial video footage showed.

Parliament went on lockdown, with hundreds of politicians and reporters huddled inside.