May came within seconds - British terror 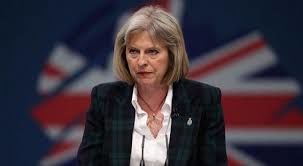 The Prime Minister – who was within a just 40 yards of the scene – was bundled into a Jaguar by police officers.

The car then left "at extreme speed" as gunfire rang out at Parliament during the incident, onlookers said.

A Downing Street source said Mrs May was safe and well after the attack, which has left at least four people dead.

Other MPs and staff sent messages to friends and family to let them know they were safe.

Labour MP Jon Trickett thanked the police and tweeted: "Democracy will not be intimidated by terror."

Former Chancellor George Osborne wrote: "All our thoughts with injured police officer & those keeping our Parliament and our democracy safe right now."

Commons Leader David Lidington broke the news of the sickening attack to MPs.

He said: "What I am able to say to the House is there has been a serious incident within the estate.

"It seems that a police officer has been stabbed, that the alleged assailant was shot by armed police.