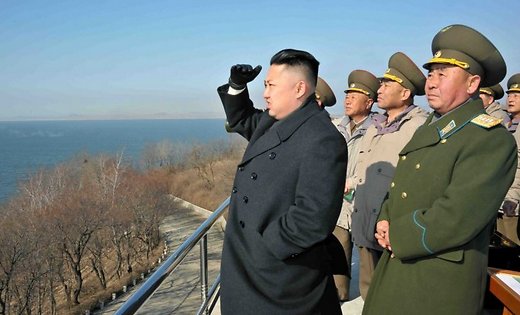 On Wednesday, South Korean news outlets reported that a sixth nuclear test by North Korea is imminent, and could take place as early as next week.

An unnamed source within the South Korean military told Korea Joongang Daily, "We have intelligence that North Korea may conduct its sixth nuclear test in the first week of April and are in the process of confirming this…We have determined that North Korea is expected to finish all preparations for a nuclear test by March 31."

Lending credence to the rumblings were satellite images recently released by North Korean watchdog site 38 North indicating that excavation activities had picked up near North Korea’s Punggye-ri Nuclear Test Site.The presence of equipment trailers and possibly communications cables indicate an upcoming test, but the images themselves are not definitive.

Supreme Leader of the Democratic People’s Republic of Korea (DPRK) Kim Jong-un has exhibited a penchant for conducting tests and launches to coincide with political events, as in February when the isolated nation fired missiles into the Sea of Japan as US Secretary of State Rex Tillerson met with Japanese Prime Minister Shinzo Abe.

Some think Pyongyang might conduct its April test on the birthday of Kim’s grandfather, Kim Il-sung, or on the Korean People’s Army’s (KPA) anniversary.

One South Korean intelligence official said, "We are analyzing that there is a high possibility that North Korea will conduct a nuclear test ahead of US President Trump and Chinese President Xi’s summit in the United States."

These reports come as South Korean Defense Minister Han Min-koo has directed his troops to retaliate immediately should there be an attack from the North.

"There shouldn't be any disorder even by an inch in the military," he said, according to Yonhap News Agency, emphasizing the importance of “perfect” combat posture.

"Any provocation from the North should not be tolerated," he added.

Tensions have spiked recently since the US and South Korea began their annual joint military drills, which included flying US Marine Corps F-35 Lightning II Joint Strike Fighters over the peninsula.

Kim threatened to level the US if Washington attempts to launch a preemptive strike, as the North believes the drills are dress rehearsals for invading his country and taking out its leadership.

Pyongyang’s state-run Korean Central News Agency (KCNA) warned, "The KPA will not remain a passive onlooker to hordes of robbers trying to hurt our people with daggers."