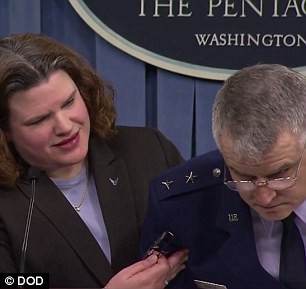 A Pentagon press briefing discussing the Air Force's $120billion budget took a tragicomic turn when a high-ranking official fainted at the podium-and the entire incident was caught on camera.

52- aged US Air Force General James Martin was talking about the future of the F-35 program when suddenly he started to slump forward, dipping his head beneath the dais.

While subordinates who rushed to help Martin joked that he fainted after reading the budget, it was later revealed that he had been suffering from the flu.

In the video from the press conference, Assistant Air Force Secretary Carolyn Gleason rushes to Martin's side and grabs him by the arm.

Light laughter is heard in the room before Gleason asks someone to help her steady the general.

Three Air Force staffers rush over and grab hold of Martin, who appears dazed and woozy.

He was eventually ushered out of the room and later taken to a hospital as a precaution.

It has since emerged that Martin, a career officer who works under the Air Force’s Financial Management and Comptroller office, was suffering from the flu or a cold.

He was back to work and was said to be doing well, according to an Air Force representative.