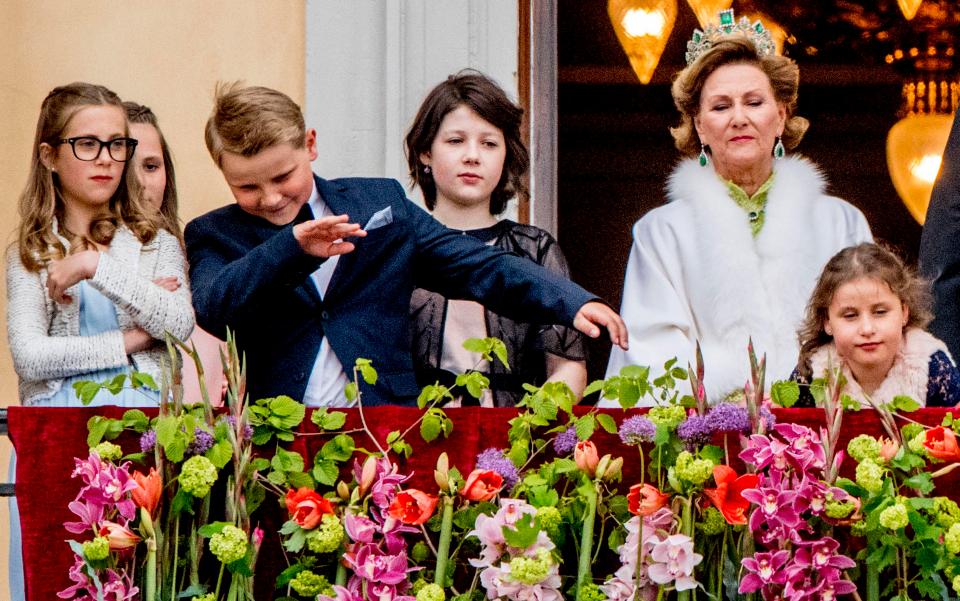 Mischievous Norwegian Prince has been pictured breaking protocol as he DABS on the royal balcony during celebrations for the King and Queen’s birthday.

Sverre Magnus briefly stopped waving to the crowds and instead pulled a dance move – causing giggles from his cousins before one knocked him back in line.

The 11-year-old became a firm fan favourite after his cheeky antics as he gathered among his royal relatives on the balcony of Oslo’s Royal Palace last night.

The youngster was there among the pomp and ceremony laid on for King Harald and Queen Sonja’s 80th birthdays.

The young prince broke with tradition to pull the move as he grinned to the crowd below.

He followed this by pulled silly faces as he amused his cousins while they stood with their grandparents.

His father, Prince Haakon, also appears to be a prankster as he left diners slightly confused at the gala dinner in honour of his parents.

During the meal he slipped away to shave off his beard and sat back down clean shaven – apparently as part of the entertainment.

Prince Sverre has been caught on camera pulling faces before as last year he was captured yawning and picking his nose during the Norwegian Constitution Day celebrations in Oslo.

And then a month later he was pictured pulling a grumpy face as he sipped juice during his grandparents’ coronation anniversary celebrations.

Sverre is the younger child of Crown Prince Haakon and third in line to succeed his grandfather, King Harald V, who turns 80 this year.