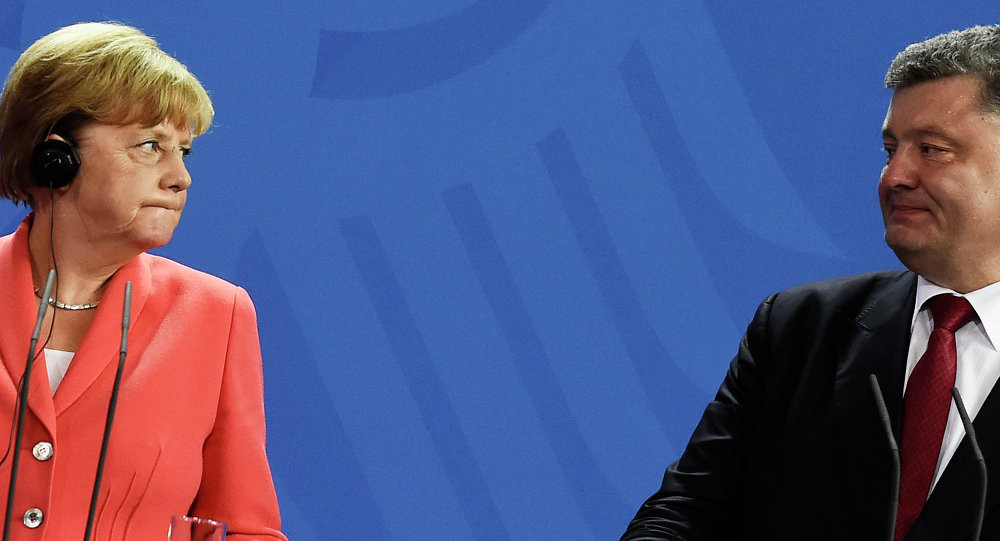 German Chancellor Angela Merkel will meet Ukrainian President Petro Poroshenko on Saturday to discuss, among other topics, the situation in the east of Ukraine.

"The chancellor will welcome Ukrainian President [Petro] Poroshenko in the official state guesthouse, Schloss Meseberg, on Saturday," Steffen Seibert, the spokesman for the German government said.

According to the spokesman, the two sides will discuss the situation in the east of Ukraine, ravaged by a conflict between the government and local forces, as well as German-Ukrainian relations and reforms envisaged by the Ukrainian president and his government.

Seibert added that Merkel and Poroshenko would also discuss the so-called Normandy Format comprising Russia, France, Germany and Ukraine, the group that helped broker the ceasefire between Kiev and self-proclaimed republics in eastern Ukraine and continues to meet to discuss progress on the peace process.

The German chancellor paid an official visit to Kiev in late January followed by a bilateral meeting with the Ukrainian president in late March in Malta, where Merkel stressed Ukraine's importance for Europe. During the early April phone conversation between Merkel, Poroshenko, and then French President Francois Hollande, the EU leaders expressed their support regarding the introduction of a visa-free regime for Ukrainians. On May, 8 the sides had a phone call to discuss the situation in Donbas.