China to set up military bases in Pakistan 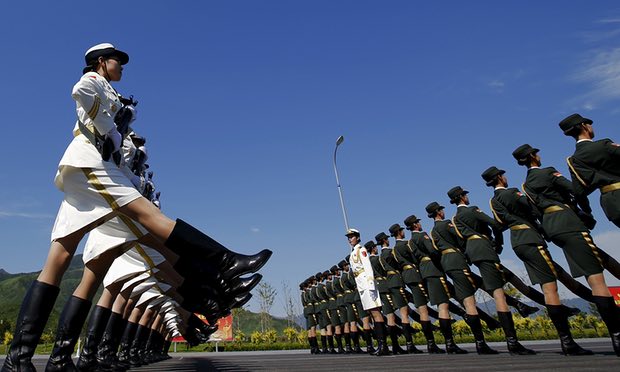 China is set to expand its military capabilities across the globe, with new overseas bases in countries like Pakistan as the world’s largest army seeks an increased role in defending China’s interest abroad, a report by the Pentagon has said.

China’s spent $180bn on the People’s Liberation Army last year, according to the annual report from the US defence department, but officials admitted that figure could not account for all spending due to “poor accounting transparency”. That estimate is significantly higher than China’s official defense budget of about $140bn.

“China most likely will seek to establish additional military bases in countries with which it has a longstanding friendly relationship and similar strategic interests, such as Pakistan,” the report said.

“This initiative, along with regular naval vessel visits to foreign ports, both reflects and amplifies China’s growing influence, extending the reach of its armed forces.”

Last year China began building its first overseas base in the African nation of Djibouti, already home to Camp Lemonnier, a large US instillation responsible for counter terrorism operations in the Persian Gulf and east and north Africa.

The new base is frequently cited in the Pentagon report along with wider ambitions for additional installations. Pakistan was singled out as a likely location and it is already the largest buyer of Chinese-made arms.

“China wants the capability to negate American primacy in the region, and after that to become the strongest military in the region,” said Sam Roggeveen, a China military expert at the Lowy Institute for International Policy.

“For now China’s ambitions remain regional, but it is becoming clear China has broader global aspirations, and while they are still in the early stages, they beginning to take shape.”

China has become increasingly assertive militarily in recent years, especially in territorial disputes in the East and South China Seas, where it frequently challenges US warships and planes. Military expansion overseas also ties into a $900bn infrastructure initiative championed by president Xi Jinping to create a new Silk Road, with some of the planned projects in unstable regions like Afghanistan and Pakistan.

But some say the plans are a natural extension of China’s desire to be more involved in international security.

He also decried the West’s “double standards” with regard to China’s ambitions, saying fears were unfounded.

The installation in Djibouti “is not a military base, it’s a military supply base. The characterisation is wrong,” Zhu added, echoing Chinese government language that seeks to play down the scope of the facility.

China already has the largest navy in the Pacific, the Pentagon report said with more than 300 ships. But China still lags behind the US and Japan in terms of technology and capability.

In a break with previous assessments, the US defense department did not record a significant increase in reclaimed land centered on disputed islands in the South China Sea. China previously poured sand into the ocean to create 3,200 acres (1,300 hectares) around seven rocks and reef in the spratly islands, according to the report.

Three of the man-made islands have airfields and will be capable of supporting three regiments of fighters once it finishes construction of “24 fighter-sized hangars, fixed-weapons positions, barracks, administration buildings, and communication facilities at each of the three outposts”.

Despite the prospect of airbases in the South China Sea, which have been called “unsinkable aircraft carriers”, it remains to be seen if China can maintain squadrons so far from the mainland for extended periods of time, Roggeveen said.

The deployment of fighters won’t escalate regional tension, Zhu said. “It is a very limited but necessary defense facility,” he added, saying US warships in the region were to blame for escalating tensions.