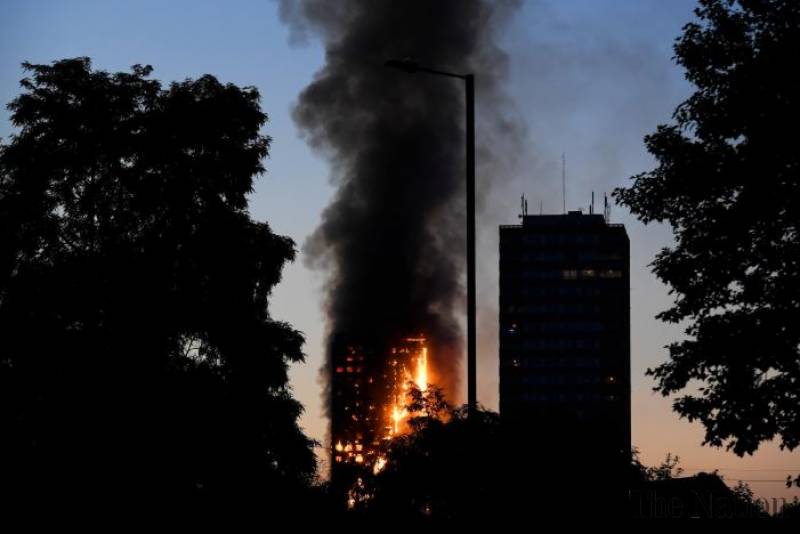 09:12 A huge fire engulfed a 27-storey block of flats in central London on Wednesday injuring a number of people and possibly trapping some residents inside the towering inferno.

Massive flames licked up the sides of the block as 200 firefighters battled the blaze along with 40 fire engines. Flumes of black and gray smoke billowed into the air over London hours after the blaze was sparked.

London Fire Brigade said the fire had engulfed all floors from the second to the top of the Grenfell Tower on the Lancaster West Estate in West London.

"We are dealing with a really serious fire that spread throughout the building," a spokesman for the fire brigade said. "The crews are doing all that they possibly can to tackle this fire."

Some people were trapped in the fire, with residents desperately shouting for help from windows on upper floors as the fire spread, some British media reported.

Reuters could not confirm those reports. A witness told Reuters that she feared not all the residents had escaped the fire. Some were evacuated in their pyjamas.

"A number of people are being treated for a range of injuries," police said. "Residents continue to be evacuated from the tower block fire."

More than 20 ambulance crews were at the scene. London Mayor Sadiq Khan said a "major incident" had been declared. Police closed the A40, a major road leading out of west London.

The cause of the fire, which broke out just after 0000 GMT, is not known at this stage, the Fire Brigade said.

An unknown number of people have been killed in a huge fire which engulfed a 27-story block of flats in central London on Wednesday, London Fire Brigade said.

At least 30 people were taken to hospital after being injured in the fire which engulfed all floors from the second to the top of the Grenfell Tower, where several hundred people lived.

“At this time I am very sad to confirm that there have been a number of fatalities, I cannot confirm the number at this time due to the size and complexity of this building,” Dany Cotton, Commissioner of the London Fire Brigade told reporters.

Residents living in the 120 apartments were evacuated after the fire broke out on the second floor of the building at around one in the morning.

Some were reported to be trapped on the roof of the building as 40 fire engines and 200 firefighters tackled the blaze.

Specialist medical teams were also called into to deal with fire related injuries.

As debris fell from the burning building down onto the streets below, police erected a wide cordon around the tower on Latimer Road which built in 1974.

One resident told local media that he had not heard a fire alarm but escaped after shouting woke him up on the seventh floor.

Twelve people have died in a west London tower block fire and the number of deaths are expected to rise, police have said.
Firefighters rescued 65 people from Grenfell Tower in north Kensington, after they were called at 00:54 BST.
Eyewitnesses described people trapped in the burning tower block, screaming for help and yelling for their children to be saved.
Police say there may still be people in the building who are unaccounted for.
The ambulance service said 68 patients had been taken to six hospitals across London, with 18 in critical care. A further 10 patients made their own way to hospital.
During the night, eyewitnesses said they saw lights - thought to be mobile phones or torches - flashing at the top of the block of flats, and trapped residents coming to their windows - some holding children.
It is understood that "several hundred" people would have been in the block when the fire broke out shortly after midnight, most of them sleeping.
Commander Stuart Cundy, of the Metropolitan Police, said: "Sadly I can confirm that there are now 12 people that have died that we know of.
"This is going to be a long and complex recovery operation and I do anticipate that the number of fatalities will sadly increase beyond those 12."