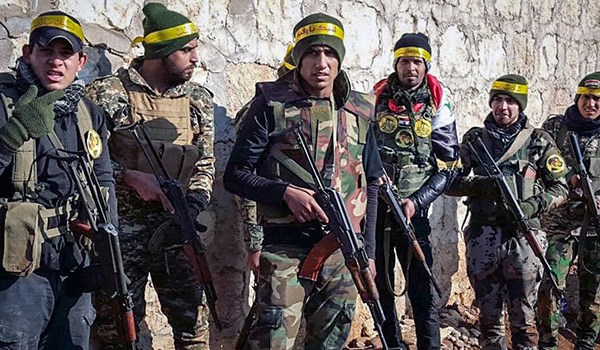 Hezbollah al-Nujaba, a major Iraqi Shiite resistance movement fighting the ISIL, said that its forces have been deployed at Syria-Iraq border and are ready to kick off a fresh round of anti-terrorism operation in the border region.

Spokesman for Al-Nujaba Hashem al-Mousawi said that his forces are stationed in the border-crossings of al-Walid and Albu Kamal, waiting for the zero hour to launch a fresh anti-ISIL operation.

Al-Nujaba, meantime, warned the US force over targeting its forces at Syria-Iraq border.

"IF the US forces do a stupid move against al-Nujaba's positions we will target their interest wherever it is possible," al-Mousawi underlined.

Relevant reports said on Monday that the members of Fatemiyoun Brigade deployed at bordering areas between Syria with Iraq as more reports said the Commander of the Quds Force of the Islamic Revolution Guards Corps (IRGC) Major General Qassem Soleimani was also in the region.

After arriving at the Iraqi-Syrian borders, the Fatemiyoun forces held prayers along with General Soleimani to thank God for their victories against the terrorist groups, the Persian service of Tasnim news agency said on Monday.

The Fatemiyoun forces and their allies in the resistance front could open their way to the Syrian-Iraqi borders after passing through the regions permanently being pounded by the US warplanes.

The Liwa Fatemiyoun also known as the Fatemiyoun Brigade and Fatemiyoun Division, is an Afghan Shiite group formed in 2014 to fight against the terrorists in Syria. Based on media reports, it numbers over 20,000 men.

The core fighters of the Liwa Fatemiyoun is constituted of the fighters of the Shiite group Muhammad Army, which was active during the Soviet war in Afghanistan and against Taliban, until its collapse after the US invasion of Afghanistan, as well as the Abuzar Brigade, an all-Afghan Shiite group who voluntarily fought in the Iran-Iraq war (1980-1988).