Theresa May to hold emergency meeting with Sadiq Khan 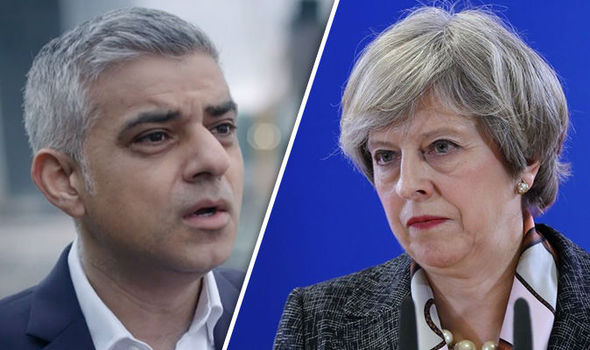 Theresa May will hold an emergency meeting on Monday morning after what the London mayor described as a "horrific terrorist attack" on worshippers near Finsbury Park mosque.

One person was killed and eight others injured when a van was driven into people near a north London mosque shortly after they had just finished worshipping at the Finsbury Park mosque after breaking the Ramadan fast.

A 48-year-old man was arrested and the attack in the Seven Sisters Road is being investigated by counter-terrorism police.

Describing it as "terrible incident", the prime minister said: "All my thoughts are with those who have been injured, their loved ones and the emergency services on the scene."

She later said police were treating the van incident "as a potential terrorist attack", adding: "I will chair an emergency meeting later this morning. All my thoughts are with the victims, their families and the emergency services on the scene."

He said: "We don't yet know the full details, but this was clearly a deliberate attack on innocent Londoners, many of whom were finishing prayers during the holy month of Ramadan.

"While this appears to be an attack on a particular community, like the terrible attacks in Manchester, Westminster and London Bridge it is also an assault on all our shared values of tolerance, freedom and respect.

"The situation is still unfolding and I urge all Londoners to remain calm and vigilant. Please report anything suspicious to the police, but only call 999 in an emergency.

"The Met have deployed extra police to reassure communities, especially those observing Ramadan."

Jeremy Corbyn, the Labour leader and local Islington North MP, expressed his shock at what had happened.

"I'm totally shocked at the incident at Finsbury Park tonight.

"I've been in touch with the mosques, police and Islington council regarding the incident. My thoughts are with those and the community affected by this awful event."