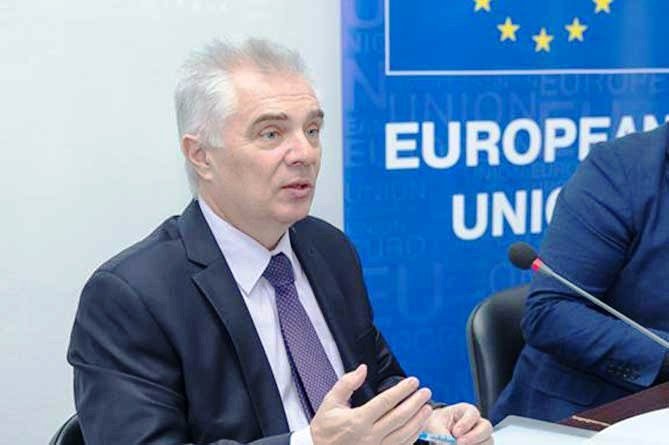 The EU is concerned with the situation in the South Caucasus and attaches great importance to this region, the head of the EU Delegation to Armenia, Piotr Switalski, said on Tuesday.

“The OSCE Minsk Group co-chairs are doing a good job in difficult environment full of challenges. We support the Minsk Group co-chairmanship. Our main role is to provide support to the mediation of the Minsk Group,” the EU envoy said.He said the constant cases of ceasefire violation are worrying, and the peace is very fragile.Switalski added that EU special representative on the South Caucasus Herbert Salber will be coming to Armenia in beginning of July, and his visit “is a demonstration that we care very much about what is happening”.

Dealing with the settlement of the Nagorno-Karabakh conflict is the OSCE Minsk Group, which was created after the meeting of the CSCE (OSCE after the Budapest summit held in December 1994) Ministerial Council in Helsinki on 24 March 1992. The Group’s members include Azerbaijan, Armenia, Russia, the United States, France, Italy, Germany, Turkey, Belarus, Finland and Sweden.Besides, the OSCE Minsk Group has a co-chairmanship institution, comprised of Russian, the US and French co-chairs, which began operating in 1996.