At least 123 killed in tanker fire near Bahawalpur 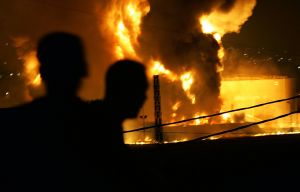 At least 123 people have been burnt alive and dozens of others injured after an oil tanker caught fire and exploded near Bahawalpur in Pakistan's Punjab province.

The incident occurred on Sunday morning as a large number of people gathered to collect petrol from the tanker, according to rescue services.

Local sources told that most of the victims were residents of nearby areas who were collecting fuel from the oil tanker, which had overturned after skidding off a national highway in Ahmed Pur Sharqia.

The injured were moved to Bahawalpur Victoria Hospital and other health facilities.

The death toll was expected to rise as many of the injured were reported to be in critical condition.

Fire brigade vehicles arrived at the site soon after the of the explosion and rescue operations were under way, the sources told.

A large number of motorcycles and vehicles were destroyed by the fire.

Al Jazeera's Kamal Hyder, reporting from Pakistan's Islamabad, said the tanker turned over on a "main logistical supply" route and "a large number of people rushed to the scene and started to collect fuel" that was spilling from the truck.

"Suddenly the area was engulfed in flames, and most of the people were caught in those flames. Apparently most of them were already carrying fuel, so they had no chance.

He added: "We are told most of the bodies are burnt beyond recognition."

Explaining that the nearest hospital does not have a burn unit, Hyder said the death toll is expected to rise.