US declared the state of emergency 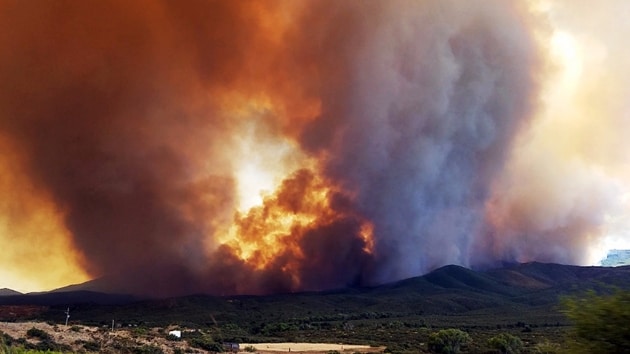 With conditions worsening for the Goodwin Fire, Gov. Doug Ducey declared a state of emergency in Yavapai County on Wednesday.

The fire, which sparked last Saturday, had grown to nearly 21,000 acres by Wednesday afternoon and remained about the same as of 10 p.m., according to an update provided by fire management officials.

By Wednesday night, there were 752 fire personnel battling the blaze, a significant increase from the 650 deployed earlier in the day, officials said.

The fire burned at least some structures in its widening path, forcing additional evacuations, officials said.

Early Wednesday, it was too dangerous to assess the damage as winds in the area were expected to gust northerly at 15 to 30 mph, said John Pierson, the incident commander for Goodwin Fire. By late afternoon, the winds seemed to have shifted southward. Officials have said the fire was about 1 percent contained.

The blaze has pushed to the northeast and now threatens the Dewey-Humboldt area to the north, Pierson said. Dewey residents west of State Route 69 from Mayer to Poland Junction were evacuated on Wednesday, along with several other residential areas, Prescott National Forest officials said.

The entire Dewey-Humboldt, an area of about 4,000 people, is on pre-evacuation notice as the fire grows along State Route 69, which remained closed between Interstate 17 and SR 169 near Prescott Valley.

On Tuesday, the town of Mayer was evacuated. By Wednesday morning, the county had seen between 1,500 to 2,000 people evacuated from the Mayer area, said Denny Foulk, the county's emergency manager.