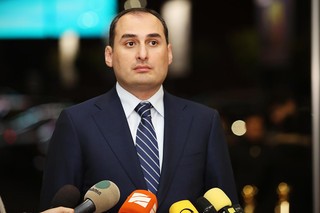 As part of meeting of Azerbaijani, Turkish and Georgian Transport and Economy ministers regarding to the Baku-Tbilisi-Kars railway project, initially bilateral meeting was held between Dmitri Kumsishvili, the Georgian minister of Economy and Binali Yildirim, the Turkish minister of Transport, Maritime and Communication.

The meeting was closed to the media.