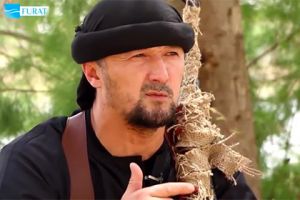 Terrorist commanders were holding a meeting at the command post near Deir ez-Zor, the Russian Ministry of Defense said in a statement.

The ministry said that on September 5, information was received about a meeting of commanders of terrorist groups at one of the disguised ISIS command posts in the vicinity of Deir-ez-Zor. They planned to discuss the current situation, as well as to work out urgent measures in connection with the rapid offensive of the Syrian government troops on the city.

"After confirming the information received and conducting additional reconnaissance, two Su-34 and Su-35 aircraft of Russia's Aerospace Forces were scrambled from the Khmeimim air base, which made a pinpoint strike with bunker busting bombs. The air strike destroyed an underground terrorist command post, a communications center and about 40 militants of ISIS," the statement said.

Four powerful warlords were among those present.

"According to confirmed information, four influential field commanders were among the destroyed militants, including "the sharif of Deir ez-Zor" Abu Muhammad al-Shimali who was responsible for finance as well as redeployment of new recruits to ISIS training camps," the statement said.

"The "war minister" of ISIS international terrorist group was at the meeting, and he died from a lethal injury," the statement said. "Effective actions of the Russian Aerospace Forces made it possible to speed up the unblocking of the city of Deir ez-Zor and allow the Syrian troops to start its immediate liberation."

Earlier in August the US State Department offered a reward of up to $3 million for information leading to the location, arrest, and/or conviction of Gulmurod Khalimov.

Then, from 2003 to 2008, he had special training in America at a Blackwater military base.

In April 2015 he vanished from Tajikistan but later resurfaced in a YouTube video saying that he had joined ISIS.