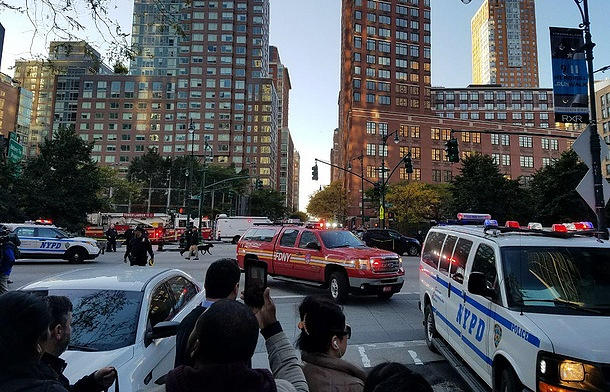 On Tuesday, a vehicular attack took place in Manhattan, leaving eight dead and 11 others injured. Ryan Nash assigned to the 1st Precinct was one of the first police officers on the scene. He fired a shot and stopped the attacker who drove a rental truck a mile down a bike path in Manhattan.

Nash’s actions were also praised by New York Mayor Bill de Blasio. Who said at a news conference on Wednesday that the officer "thought this was all in a day's work and what a cop does to protect other people. But he deserves the accolades of the people of this city, as do his partners."

An NYPD detective told The Guardian that officer Nash was at home on leave on Wednesday because it was "a very overwhelming incident," adding that "what he did was nothing short of heroic and we are grateful."

On Wednesday afternoon, Nash read a short statement to reporters, thanking his family and friends for their support as well as the officers who assisted him.

"Although I feel we were just doing our job… I understand the importance of [Tuesday's] events," Nash said.

The officer also said he was "grateful for the recognition" he and his colleagues have received.

Eight people, most of them foreign nationals, were killed in Tuesday’s attack and 11 were injured, which makes it the deadliest incident in New York since the 9/11 attacks in 2001. The assailant has been confirmed as Sayfullo Saipov, 29, an Uzbek national.

Federal prosecutors have charged Saipov with terrorism. The suspect told investigators he planned the attack in advance and rented a truck to practice the violent act, US officials said Wednesday.