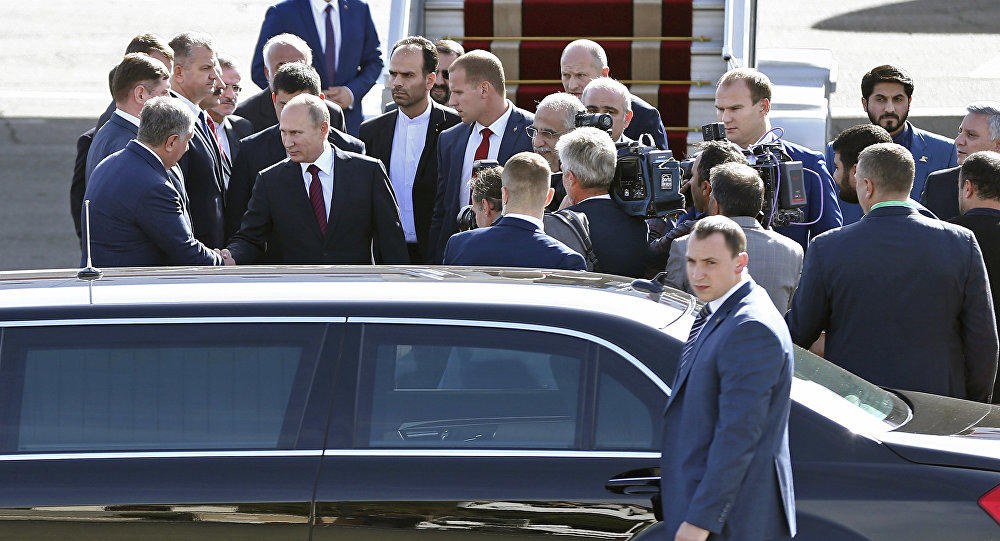 The Russian President visited Iran on Wednesday, and his trip was certainly not missed by social media. Sputnik Iran has taken a look about what was said, choosing the most interesting comments published about the Russian leader.

Axar.az reports citing Sputnik that, social media users from Iran took a keen interest in the recent visit of Vladimir Putin to their country. Some users, such as Reza Araby, even monitored the movement of the presidential aircraft in real-time via the Flightradar24 flight tracking website, posting continual updates on its whereabouts.

Others, like Miladadham, focused more on the President's meetings with Iranian leaders, comparing them with his encounters with Donald Trump and Barack Obama. The user made a collage of the meetings and pointed out Vladimir Putin's "mastership of using a body language."

However what caught the attention of the Twitter users the most were the apologies of the Russian leader for the inconvenience caused by his presidential motorcade and the traffic jams it apparently created in the streets of Tehran.

One user calling himself Parhiz posted a video fragment from the joint news conference of the Presidents of Russia, Iran and Azerbaijan, where Vladimir Putin praised Tehran residents for the patience they showed during their movements around the city.

"We saw how difficult this was. But I hope that our work today was not in vain," Vladimir Putin said.

"At least, someone from the highest officials has apologized to the residents of Tehran for the "diplomatic traffic jams," the user tweeted, pointing out that the Iranian President has smiled at Putin's gratitude.

Other residents seemed to be also pleasantly surprised by these remarks.

"Putin has come to Tehran and has apologized for the jams and the closure of roads! Unfortunately, our leaders do not do so," tweeted Tajik_Rostami, while @hak508313 said that he could not believe that a highest official travels to another country and apologizes for the jams.

Vladimir Putin came to Iran for trilateral talks with Iranian President Hassan Rouhani and the leader of Azerbaijan Ilham Aliyev, to discuss topics such as the negotiation on the convention of a legal status of the Caspian Sea, which is bounded by the three countries as well as issues of regional stability and security.