Protest held in Seoul ahead of Trump visit 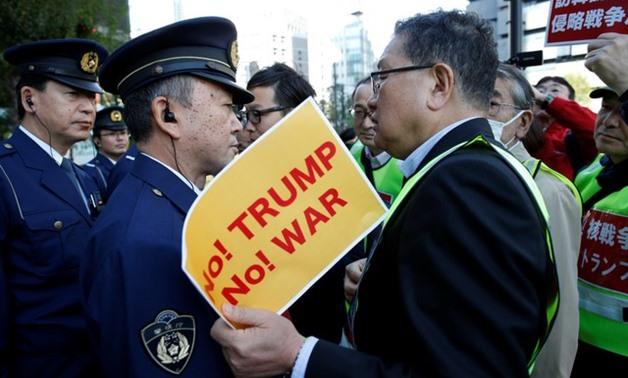 South Koreans have staged a rally in the capital Seoul against US President Donald Trump, who is expected to visit the Asian country next week.

Axar.az reports citing Press TV that hundreds of anti-Trump protesters gathered for an event called, "No Trump, No War," on Saturday.

The demonstrators said Trump was not welcome on the South Korean soil as his visit would only raise tensions in the region at a time when many feel the risk of conflict with North Korea is running high.

“We hate Trump. We love peace. We love equality,” the protesters were singing.

Yoo Seung-hyun, a 32-year-old activist, said he wanted “Trump to know we do not want a war.” He added that Trump needed to understand that “a lot of the problems on the Korean Peninsula depend on him.”

Trump on Saturday embarked on a 12-day trip to Asia, the longest tour of the continent by a US president in 25 years and one that will be shadowed by fears of another international conflict.

Trump’s Asia tour will be dominated by trade talks and how to muster more pressure on Pyongyang over its missile and nuclear programs.

Some US allies have expressed concern about Trump’s fiery rhetoric on North Korea, including his vow to “totally destroy” North Korea if it threatens the United States.

Some of Trump’s advisers have warned him that US military options are limited at best, saying Pyongyang could launch an artillery barrage on Seoul, which is only about 50 kilometers from the border.

The CIA has estimated that North Korea could be only months away from developing the capability to strike the United States with nuclear weapons.

After meeting with leaders of Japan and South Korea, Trump will visit China, where he is expected to press President Xi Jinping to do more to rein in Pyongyang.