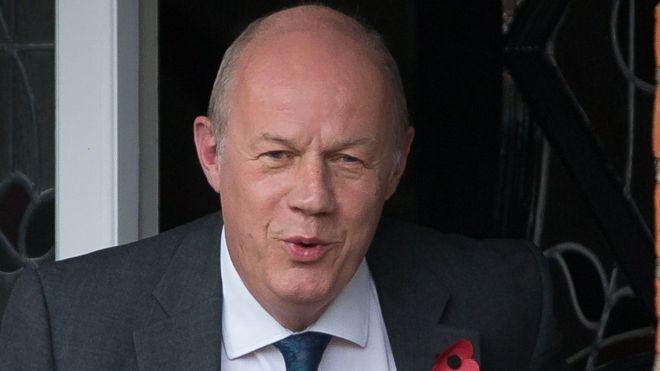 Theresa May's most senior minister has denied a claim that police found pornography on his computer during a raid on his Westminster office in 2008.

And he said police had never told him that any improper material had been found on his parliamentary computer.

Mr Quick said he "stood" by the claim and would take part in an inquiry.

The revelations are the latest in a growing sexual misconduct scandal in Westminster.
'Humiliated'

On Sunday, further details emerged about allegations against Sir Michael Fallon, who this week resigned as defence secretary over his behaviour.

The Observer reported that he quit shortly after journalist Jane Merrick told Downing Street he had lunged at her and attempted to kiss her on the lips in 2003 after they had lunch together.

And Tory MP Daniel Poulter, who represents Central Suffolk and North Ipswich, has been referred to the Conservative Party disciplinary committee after allegations in the Sunday Times, which he has denied in full.

The allegation regarding Mr Green, who is effectively the prime minister's deputy, relates to an inquiry into Home Office leaks which briefly led to his arrest in 2008.

Former Metropolitan Police Assistant Commissioner Bob Quick said on Sunday that his officers had found pornographic material on Mr Green's computer in his Commons office after they searched it as part of their controversial investigation - which resulted in no charges.

The ex-anti-terror chief said he had made an appointment to speak to a senior official in the Cabinet Office, which last week launched an inquiry into an unrelated allegation against Mr Green, to discuss the matter.

"I bear no malice to Damian Green," he told BBC News.

Mr Quick, who quit his role in 2009 after inadvertently revealing secret documents, accepted he had not asked officers to report the matter at the time, saying they "didn't expect to find the material" and were in the midst of a "very difficult inquiry with a lot of pressure to drop the case".