Bahceli: US is 'an unreliable country' 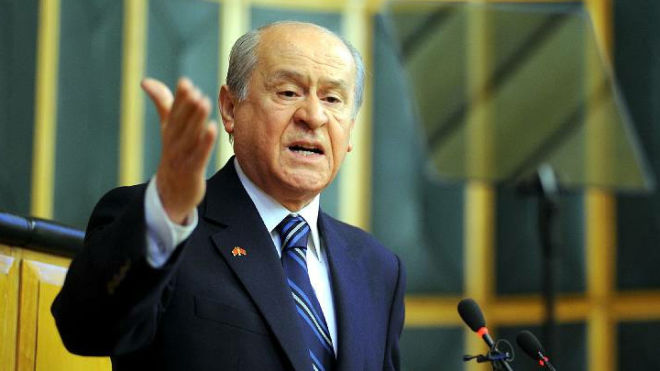 Amid signs of mending ties between Ankara and Washington, the leader of Turkey’s opposition Nationalist Movement Party (MHP) has blasted the U.S. as "an unreliable country."

Axar.az reports citing AA that speaking with journalists in parliament on Tuesday, Devlet Bahceli said that the U.S. had violated the "rules of alliances" in its treatment of Turkey.

"If the U.S. primarily took a kind approach to Turkey's demands, then the Turkish nation would do what is necessary," said Bahceli.

He added: "I think the U.S. would do well to examine itself."

The two countries on Monday partially restored visa services after a row over Turkish staffers of a U.S. mission being arrested for alleged ties to FETO, the group behind last year’s defeated coup.

His meeting with U.S. Vice President Mike Pence on Thursday is expected to cover a wide range of bilateral issues, including areas of disagreement such as the extradition of Fetullah Terrorist Organization (FETO) leader Fetullah Gulen and the U.S. arming of the terrorist PKK/PYD in Syria.

Erdogan will meet with Russian President Vladimir Putin on Nov. 13 in the Russian city of Sochi.

The two leaders are expected to discuss the ongoing civil war in Syria and energy cooperation between the two countries.

"Because the persecution of more than millions of people in the Middle East should be stopped through people talking each other."

Touting his party’s support to the government in foreign policy and the fight against terrorism, he said, "In Turkey's recent state, such support is a must."

He added: "There’s no sense in pursuing partisanship."

The MHP prominently lent its support to the ruling Justice and Development (AK) Party after last year's coup attempt by the Fetullah Terrorist Organization (FETO).

The MHP also backed the AK Party's Yes campaign ahead of April's constitutional referendum, as well as the government’s Syria and Iraq policy.

Asked about the main opposition Republican People's Party (CHP) call to hold early local elections in the wake of several mayor resigning, Bahceli said he respected the call, but that his party opposes early polls.

Turkey is scheduled to hold local elections in March 2019.