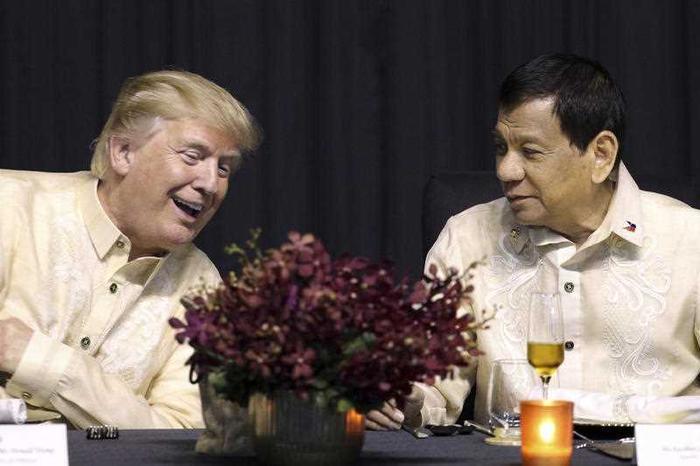 President Rodrigo Duterte crooned a hit Filipino love song at a dinner in Manila for leaders from across Asia, explaining later that it was “on the orders of Donald Trump”.

Axar.az reports citing The Guardian that the US president and Duterte were among 19 leaders at a gala in the Philippines capital on Sunday ahead of the annual Association of Southeast Asian Nations (Asean) summit. At one point Duterte took the microphone to sing “Ikaw” (You), in a duet with local pop diva Pilita Corrales.

One of the song’s verses, translated from Filipino, begins: “You are the light in my world, a half of this heart of mine.”

“Ladies and gentlemen, I sang uninvited, upon the orders of the commander-in-chief of the United States,” Duterte said later, according to the ABS-CBN news channel.

Duterte, who is sometimes described as the “Trump of the East” because of his brash style, was due to meet the US president on the sidelines of the summit on Monday.

The United States and its former colony, the Philippines, have been strategic allies since the second world war. But their relations have been strained by anti-US outbursts from Duterte and his enthusiasm for better ties with Russia and China.