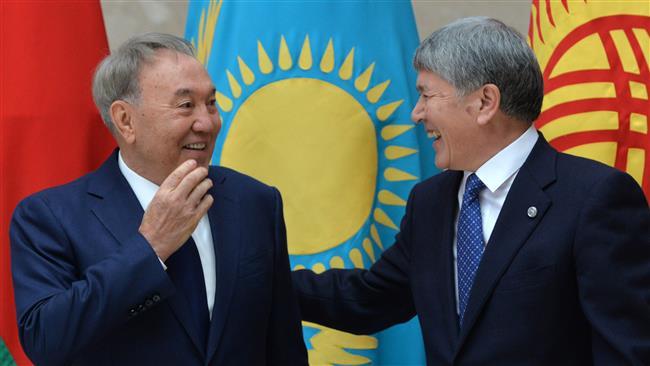 Kyrgyzstan's President Almazbek Atambayev has signed a parliamentary resolution to refuse $100 million in aid from oil-rich neighbor Kazakhstan amid an escalating spat between the two Central Asian countries.

Axar.az reports citing Press TV that both Kyrgyzstan and Kazakhstan are close to Russia and are members of a Moscow-led trade bloc, the Eurasian Economic Union (EEU), which the Kremlin has styled as an alternative to the European Union.

But Kyrgyzstan reacted furiously when ageing Kazakh leader Nursultan Nazarbayev appeared to endorse a popular opposition candidate rather than Atambayev's chosen successor ahead of a bitterly contested vote that took place in October.

The two countries have traded accusations ever since, with Kazakhstan imposing growing restrictions on goods imported from Kyrgyzstan which the resource-poor country says run counter to the terms of the EEU trade bloc.

Kyrgyzstan's presidential website published the news that Atambayev had signed off on the parliamentary resolution on Thursday, deepening a rift in which Russia has yet to intervene.

Atambayev, who came to power on the back of the country's second revolution in 2010 but was limited to a single six-year term in power, is set to be replaced as president by ally Sooronbai Jeenbekov on November 24.

Jeenbekov defied predictions of a second round by winning the October 15 election with around 54 percent of the vote. His nearest challenger, Omurbek Babanov, secured Nazarbayev's support but only a third of all votes cast in an election tainted by accusations of administrative pressure and voter intimidation.

The $100 million in Kazakh aid was earmarked for the construction of laboratories to help bring Kyrgyz goods in line with the bloc's standards, but had been delayed several times, according to Kyrgyz authorities.