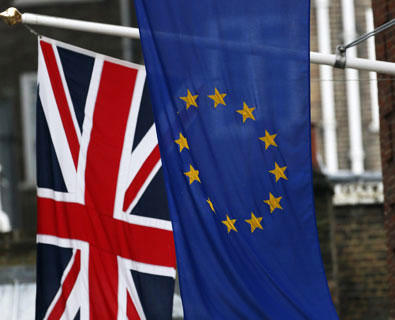 The UK's former top international trade official, Sir Martin Donnelly, has warned that the EU's single market remains the only possibility for his home country to be "able to deliver the guaranteed market access, shared regulation and consumer protection that Britain needs" after Brexit as "there is no credible free trade deal on offer" for London.

Sir Martin Donnelly has stressed that his county won’t get the same benefits it enjoys from the EU's single market membership and therefore urged "MPs unsure about what form the final Brexit deal should take to buy themselves time by backing temporary membership of the European Economic Area," which will "allow more time to see" if the country "can find a realistic alternative that meets its economic needs."
His urge comes amid reports that a leaked European commission document suggests that after its exit from the European Union, the UK would be offered only "a basic free trade deal similar to that struck with Canada" and would not have any special conditions which would grant it access to the single European market, as was hotly anticipated by Theresa May’s government.

In summer of 2016, Britain voted in favor of leaving the European Union and in March 2017, the country initiated the official withdrawal process, which is set to be completed by the end of March, 2019. Its talks with the EU however are currently deadlocked over three aspects: how much the UK owes the EU, what happens to the Northern Ireland border and what happens to UK citizens living in the EU and EU citizens residing in Britain.

London wants to negotiate its future trade relations with the Union and its plan for a two year transition period to ensure the immediate post-Brexit period is as smooth as possible. Brussels however says it is not going to discuss the future until enough progress has been made on the above issues.