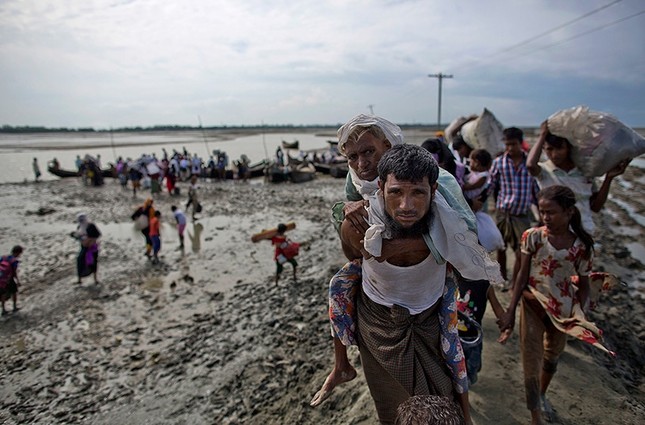 A delegation of American lawmakers called the atrocities of Myanmar security forces on the Rohingya community "war crimes" during their meeting with the premier in capital Dhaka on Sunday, according to the premier's Press Secretary Ihasnul Karim.

"It is like war crimes," Karim quoted the delegation's leader Jeff Merkley as telling Prime Minister Sheikh Hasina Wazed at her Gonobhaban residence a day after the U.S. lawmakers visited Rohingya camps in Cox's Bazar, according to state-run news agency Bangladesh Sangbad Sanstha.

Karim said the U.S. delegation told the premier that every country should condemn the ethnic cleansing of Rohingya.

The senators also appreciated her generous response to the challenge of helping the Rohingya and told her that the U.S. was ready to provide every assistance to resolve the crisis.

Merkley said they had gathered first-hand information from the persecuted people in Cox's Bazar, adding that the description of the persecution provided to them was "horrifying", the state-news agency added.

Meanwhile, Germany, Sweden, Japan and the European Union also offered their strong support to Bangladesh over the Rohingya issue.

Since Aug. 25, an estimated 620,000 Rohingya have crossed from Myanmar's western state of Rakhine into Bangladesh, according to the UN.

The refugees are fleeing a military operation in which security forces and Buddhist mobs have killed men, women and children, looted homes and torched Rohingya villages. According to Bangladeshi Foreign Minister Abul Hasan Mahmood Ali, around 3,000 Rohingya have been killed in the crackdown.