US needs to withdraw weapons from YPG terrorists in Syria 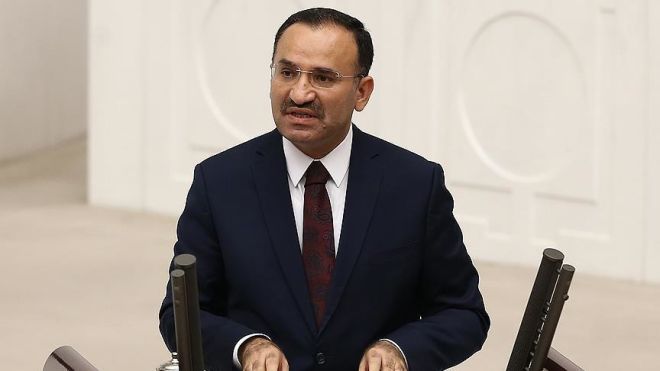 The U.S. would be deceiving the world if it does not stop providing weapons to the terrorist PKK's Syrian offshoot Democratic Union Party (PYD) and its armed wing People's Protection Units (YPG), Deputy Prime Minister Bekir Bozdag said Monday.

Speaking on a live interview on Kanal 24 TV, Bozdagsaid the recent phone call between President Recep Tayyip Erdoğan and U.S. counterpart Donald Trump marked a turning point in reviving relations between the two countries, but Washington must honor a pledge to end weapons provisions to the YPG.

"We need to see concrete reflection on the ground regarding the statements" Bozdag said, adding that Turkey will closely be following the developments.

On Friday, the White House announced that President Trump said that he had informed Erdoğan that Washington was adjusting military support to "partners on the ground" in Syria.

The deputy prime minister also touched upon the case of Turkish-Iranian gold trader Reza Zarrab, saying that the case does not have a legal basis and needs to be ended as soon as possible.

He noted that the prosecutors need to show evidence and proof for their claims and clarify how they obtained the evidence.

Zarrab is incommunicado and diplomatic representatives of Turkey have not been able to gain access. Zarrab's lawyer has said that he cannot communicate with Zarrab, and the Turkish Foreign Ministry has issued two diplomatic notes to find out the whereabouts of Zarrab. Ankara has been notified that Zarrab's health is in good condition; however, there have been no further details on his whereabouts.