The US respects Azerbaijan’s right 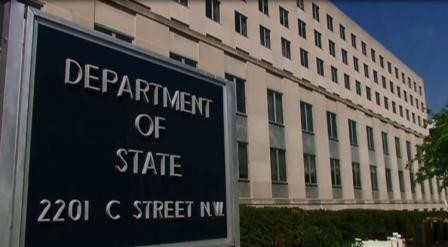 The US respects Azerbaijan’s sovereign right to raise issues related to Nagorno-Karabakh in regional and international organizations, including the Parliamentary assembly of the Council of Europe (PACE), the US Department of State told on Feb. 15.

The US Department of State made the remarks commenting on the role played by Victoria Nuland, the US assistant secretary of state for European and Eurasian affairs, with regard to a resolution on Nagorno-Karabakh, which wasn’t passed in PACE.

Previously, the Parliamentary Assembly of the Council of Europe (PACE) adopted a resolution on a report titled “Inhabitants of frontier regions of Azerbaijan are deliberately deprived of water.”

The report prepared by MP Milica Markovic, representing Bosnia and Herzegovina, was adopted Jan. 26 at the PACE Winter Session in Strasbourg.

However, the second resolution on the Nagorno-Karabakh conflict was not passed by the PACE. Earlier, in an interview with an Armenian newspaper, US Congressman Adam Schiff said Nuland played a special role in the non-adoption of the said resolution by the PACE.