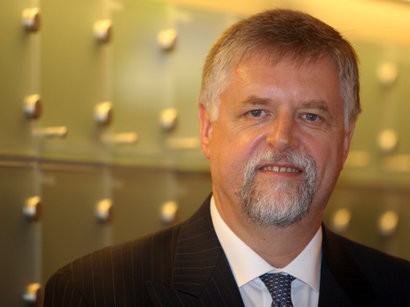 Status quo in the Armenia-Azerbaijan Nagorno-Karabakh conflict is not sustainable, says Herbert Salber, the European Union's special representative for the South Caucasus.

Salber said he has had meetings with the Azerbaijani president, foreign minister and defence minister, and they discussed the recent escalation along the line of contact between the Azerbaijani and Armenian troops.

"We discussed the escalation that took place at the line of contact at the beginning of April, the aftermath of these developments, and of course the prospects of how this issue can be solved," he said.

He went on to say the EU respects the leading role of the OSCE Minsk Group and its co-chairs, adding that this role has to continue.

"The Minsk Group has been helpful and we, the EU, very much encourage the Minsk Group to continue with these endeavours," he added.

Salber, further touching upon Russia's proposal on the Nagorno-Karabakh conflict's settlement, said, "we don't know what is the certain proposal."

Earlier, during a meeting with Azerbaijan's President Ilham Aliyev, the Russian Foreign Minister Sergei Lavrov said "We have the proposals that we are trying with the co-chairs to actively use for achieving an agreement between Azerbaijan and Armenia."

Further during the interview with Trend, Salber said the Minsk Group is the right form to push negotiations on the Nagorno-Karabakh conflict.

"I don't believe that the format of the Minsk Group should be changed," he said, adding that the change of format would require a new consensus with the OSCE.

"I doubt this consensus could be achieved," he stressed.

Salber further pointed to the necessity for the parties to respect the ceasefire and show the strength not to go to any risks.

"Parties should know it is an obligation for them to act in a responsible way," he added.

Speaking about his trip to Baku, Salber said the visit was exploratory to understand better where the endeavours for a peaceful solution are at the very moment, and how the sides see these endeavours.

"It gave me some insights that I can report to the leadership of the EU," he added. "That helped me a lot."

He added that the EU member-states are interested to know what is happening in Azerbaijan.