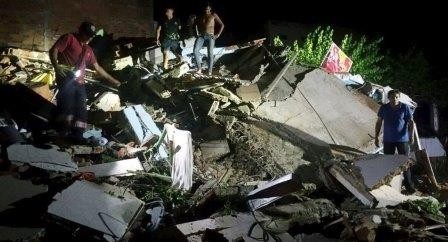 A powerful 7.8-magnitude earthquake in Ecuador has killed at least 77 people and injured more than 500, Vice-President Jorge Glas says, according to BBC.

The quake struck at 18:58 local time on Saturday (23:58 GMT) near the northern coastal town of Muisne.

Widespread severe damage is reported, with a bridge destroyed as far south as Guayaquil about 300km (190 miles) away.

A state of emergency has been declared in six provinces and the National Guard has been mobilised.

The quake, the country's largest in decades, also shook buildings in the capital, Quito.

Mr Glas said that at least 77 people had died and 588 had been injured, adding that the figures could rise as a number of affected areas had not yet been reached.

The US Geological Survey said the earthquake struck at a fairly shallow depth of 19.2km (11.9 miles), about 27km from Muisne in a sparsely populated area.