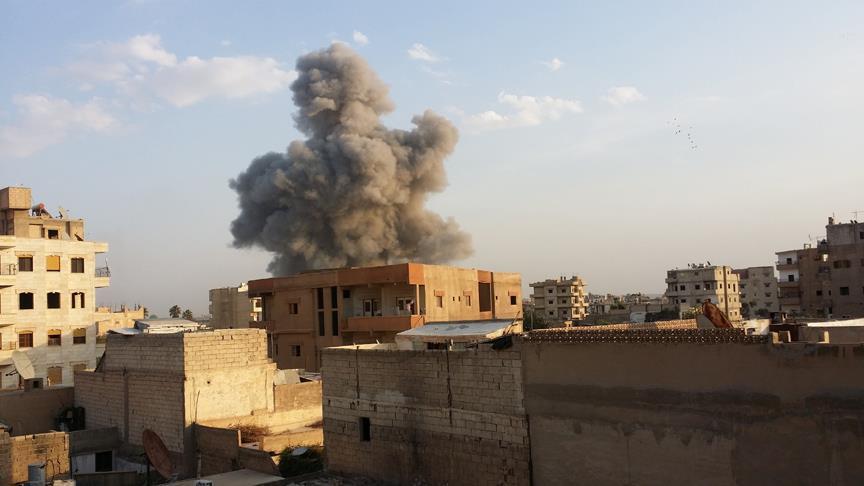 Bashar al-Assad regime forces along with Iranian-backed militias have launched an operation against opposition groups in southwestern Daraa province, killing eight civilians, according to a Syrian civil defense unit on Wednesday.

Amar Abadzayd from a civil defense unit in Daraa told Anadolu Agency 15 more civilians were also injured in the attacks targeting rural areas in northern and eastern part of the province.

Local sources in the area told Anadolu Agency on condition of anonymity that Hara, Nahta, Bushra Harir, Dellafai Miskiya and Hirak areas have been under intense bombardment of regime-Iranian forces.

Anadolu Agency reported Tuesday citing local sources that Assad regime forces and Iranian-backed forces, including the Iranian Revolutionary Guards Army, Lebanese Hezbollah, Zainebiyoun Brigades and Fatemiyoun Brigades have been deployed in several areas of Daraa for a likely operation despite warnings from the U.S. administration.

The Daraa operation had targeted an area declared a “safe zone” and a de-escalation zone -- where fighting is supposed to be prohibited, the sources said.

Under the Astana, Kazakhstan agreements, in May 2017, Daraa was declared a de-escalation zone, and two months later, a new agreement was reached between the U.S. and Russian governments declaring it as a kind of safe zone.

The U.S. and Britain, in cooperation with the Jordanian army, cut their support for the opposition along the border almost immediately after the agreement with Russia.

Washington has warned the Assad regime against mounting an operation in Daraa. State Department spokeswoman Heather Nauert on May 27 said they were watching the preparations for an attack with deep concern.

On June 14, she repeated this warning, saying: "The U.S. will take necessary measures if the regime violates the cease-fire in the region."

There are two main basins under opposition control in the province of Daraa, connected to each other by a narrow corridor along the border with Jordan.

The city center is also divided between the Assad regime in the north and Free Syrian Army forces in the south.