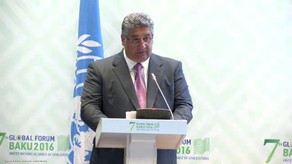 "This year Ganja has been declared the youth capital of Europe. In addition, next year 1000 scouts will take part in the Scouts Forum in Azerbaijan. All this shows the interest of the country to invest in young people."

Azerbaijan's Youth and Sports Minister Azad Rahimov said speaking at the Youth Forum of the UN Alliance of Civilizations. In his speech, Rahimov expecially stressed the establishment of Azerbaijan Youth Foundation.

In addition, the Azerbaijani minister said that in the world today, thousands of young people are killed in conflicts or in an attempt to move to other countries to achieve their goals and desires.

He noted that as a result of the Armenian occupation of Azerbaijani territories a lot of cultural monuments have been destroyed, but Azerbaijan was able to prove its commitment to the multicultural society.