Our journalists in Berlin: The most dangerous theme... 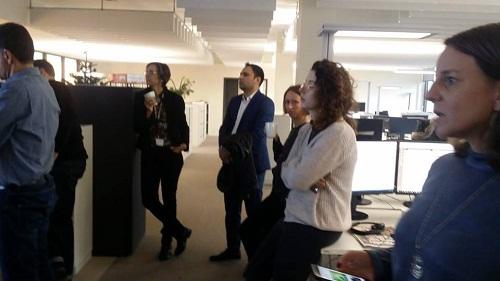 In the frame of the Berlin Education Tour, a common project of the Economic and Social Development Center of Azerbaijan (CESD) and German IDEM, Azerbaijani journalists were hosted by Berlin Berliner Tsaytunq and Berliner Kurier newspapers.

Axar.az reports that during the meeting, journalists attended in the morning planning of the Berliner's first daily newspaper, Berliner Tsaytunq.

According to newspaper staff, "Berliner Tsaytunq" is published daily with an edition of 60,000 and the number of its monthly subscribers is more than 21,000:

"Young people are not too interested to read newspapers. They are more interested in our online version. That’s why we are trying to use the Scandinavian model for independent development of our online and newspaper versions. The majority of our newspaper readers are older than 65."

Berliner Tsaytunq and Berliner Kurier are independent publications, their earnings are only from advertisement and sales.

According to journalists, salaries of employees, all editorial expenses are paid by three sources: advertisements, subscription and retail newspaper sales.

The price of newspapers is 1.5 euros and the monthly subscription is 43 euros.

According to the newspaper researcher Gabriela Faller, in Berlin the most problematic and dangerous theme is the real estate market and dirty money laundering issues:

I do not mean that the journalist was exposed to physical pressure when we said "Dangerous." According to this information, there are many court cases, and sometimes the newspaper is justified, but it is lost in court. "

According to Gabriela, an event like this happened to him:

"By means of the Russian oligarchic German partners, it was bought a large territory. After investigating this issue, they gave to court our newspaper. We won the court in Berlin. Then the other side gave us a court in Hamburg. It was not possible to win a court in Hamburg."