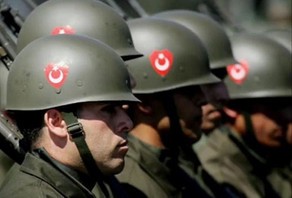 Turkish army said on Monday that it struck Daesh targets in Syria using howitzers and rocket projectors, and killed 34 terrorists in the attacks.

In a separate statement, the army also said that four MQ-1 armed coalition drones killed 29 Daesh terrorists in Syria after taking off from Turkey's İncirlik base. The drones reportedly destroyed five weapon emplacements of the terrorist group.

Both attacks against Daesh occured on Sunday, the army said.

In the strikes, Turkish howitzers and multiple rocket launchers Daesh targets about 12 km (seven miles) south of the border, the military said.

Turkey has repeatedly fired back at Daesh positions under its rules of engagement, but has said it needs greater support from Western allies, citing the difficulty of hitting moving targets with howitzers.