A driver of economic growth and prosperity 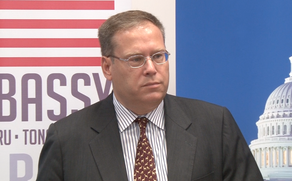 During a visit to Azerbaijan, Georgia and Kyrgyzstan I was deeply impressed by the desire of so many government officials and private sector representatives to expand trade and investment connections between neighboring countries in order to better integrate into global networks and sustainably grow their economies.

According to the press service of the US State Department, the US Deputy Assistant Secretary of State for Economic and Business Affairs Kurt Tong said at a forum on trade and transit corridor Transcaspian-east-west.

"I visited the Port of Alat, outside Baku, to learn how they are preparing to expand their links across the Caspian Sea to Kazakhstan and Turkmenistan and then west to Georgia, Turkey and onward to Central Europe."

"Governments in the region, as well as others around the globe, have come to understand that diversification of their economies is imperative to sustainable economic growth. Already we have seen a number of actions in response to the worsening external environment, and the United States stands ready to assist in these efforts", K.Tong said.

"The revival of the historic Silk Road is consistent with the type of economic development that the United States is supporting worldwide: increasing regional economic integration and interconnectivity.

In the modern era, nations will continue to look to major economic centers such as the United States, Western Europe and Northeast Asia to help spur growth. But they must also build tighter networks with their immediate neighbors as well. Azerbaijan, Georgia, Kazakhstan, Turkey and their neighbors can – and should – be drivers of economic growth and prosperity in the 21st Century."

Deputy Assistant Secretary of State also recalled the signing of the US-Azerbaijan agreement on "open skies" that "promotes the liberalization of air transport between the two countries."