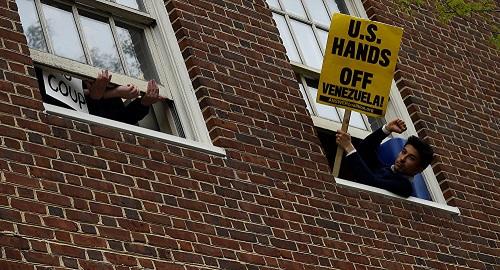 A video-appeal from activists followed a Friday takeover of the Venezuelan embassy in Washington, DC by self-proclaimed interim president Juan Guaido's representative in the United States, Carlos Vecchio.

Activists, who had been protecting the embassy of Venezuela on behalf of Venezuelan President Nicolas Maduro's legitimate government for the past weeks, uploaded the video-statement on Twitter, in which they are calling for a "national mass mobilization in New York City on 21 September when the United Nations General Assembly is meeting."

The 74 Session of the United Nation General Assembly (UNGA) will open on 17 September, with the first meeting on the high-level to take place on 24 September.

According to the statement by activists, on 21 September "we'll have a march and a rally, and the next day we'll have a public educational event."

Activists called on people to "plan now, mark your calendar now to come to New York City," noting that they are going to call it "The People's Mobilization to Stop the US War Machine."

It is notable, that the chosen date — 21 September is the International Day of Peace or just "Peace Day", established by the UN in 1981.

Activists with the Embassy Protection Collective had been living inside the Venezuelan embassy since 10 April in order to prevent the United States and Venezuela's opposition from taking over the facility, following Washington's orders for the mission's diplomats to leave its premises.