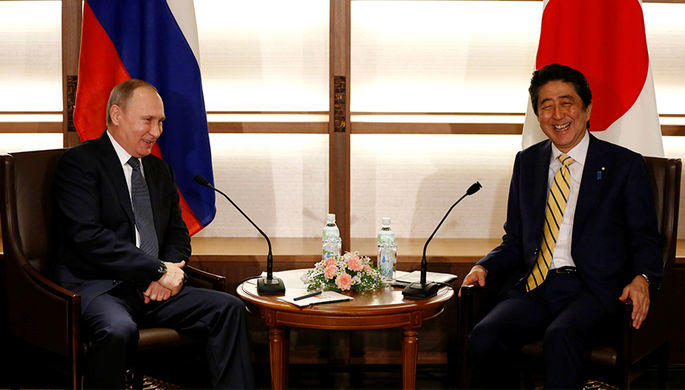 Russian President Vladimir Putin and Japanese Prime Minister Shinzo Abe will hold talks during next month’s G20 Summit in a bid to resolve a dispute over Moscow-held islands claimed by Tokyo.

The two leaders will meet in Japan’s capital June 29 on the sidelines of the gathering, foreign ministers of the two countries told a news conference Friday in Tokyo.

Russian Foreign Minister Sergey Lavrov held talks with his Japanese counterpart Taro Kono and the two “agreed to work toward materializing a plan to conduct joint economic activities” on the group of disputed islands off Hokkaido.

"We confirmed that we will go forward in a flexible and constructive manner," Kono said at a joint press briefing with Lavrov in Tokyo.

However, Lavrov said "not insignificant differences" remain in the two countries' views on how to go forward with signing a post-World War II peace treaty.

Moscow and Tokyo have long been at odds over the sovereignty of the four islands, which are known as the Northern Territories in Japan and the Southern Kurils in Russia.

The former Soviet Union seized the islands following Japan's surrender in 1945 at the end of World War II. Tokyo views it as an illegal occupation, and the two countries have witnessed continuous tensions over the issue.

“To conclude a treaty, Japan must accept the outcome of the war,” Lavrov separately told reporters after the press briefing.

He reiterated that Moscow was open to implementing visa-free travel between Japan's northernmost main island of Hokkaido and the island of Sakhalin in Russia's Far East.

If Japan accepts the proposal, the visa-free travel could eventually be extended to all of Russia and Japan, he said.